Is Driving in the Left Lane Legal?

08 Mar Is Driving in the Left Lane Legal?

Posted at 11:56h in Car Accidents by Internet Team

DRIVING IN THE LEFT LANE. ILLEGAL? 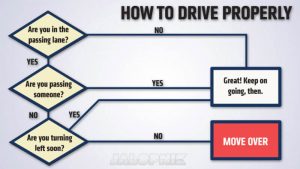 You have seen the “Left Lane For Passing Only” signs, and you wonder about how long you can stay in the left lane. You also remember that the left lane was always the “fast” lane and the right was for slower traffic. What happened?

All states allow use of the left side for passing, but after that, there may be different rules, or “keep-right laws”. A table put out by MIT shows these  laws for all states: 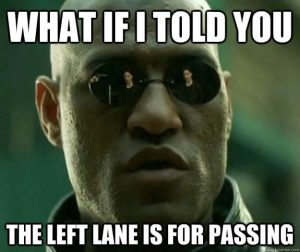 In 2009, Louisiana became one of those states that allows use of the left lane for passing only or for turning left. (R.S. 32:71)  Let’s be clear, then, about the use of the left lane. In a “multi-lane” highway, It is for passing only. The law also includes the above rules about the left lane. Slow moving traffic, going under the speed limit, must stay in the right lane. Drivers cannot block other drivers from overtaking them and must move over. Drivers cannot drive slower than drivers in the right hand lane.

Driving in the left lane, by itself, is not a major traffic safety concern, say traffic experts. Speeding and distracted driving are much more dangerous. However, the problem lies in drivers who are “cruising” in the fast lane. They slow everyone down, so that the traffic flow is not smooth. Those drivers behind them, even good drivers, become frustrated and angry. Some drivers become very angry, and that is when road rage and accidents can happen.

More states are taking steps to create “left-lane” laws to help keep crowded, multi-lane roads safe. Louisiana has added its Rolling Roadblocks law,  RS 32:73.1 , to its left lane laws. The driver who is “obstructing or impeding” traffic by driving too slowly in the left side lane could get a ticket. Arkansas, Texas, and Mississippi have also added laws to include fines. Texas can charge a fine of up to $200.

The problem with continuous driving on the left is becoming a serious one. Drivers who use the lane as they please add to the dangers on our highways. Risky driving habits, and,  perhaps, road rage, of those behind that driver will happen. The best advice is to be aware of the laws, follow them, and do your part to drive safely.

If you have been injured in a road accident, contact Louisiana car accident attorney Clay Burgess immediately. He will offer you a free consultation to discuss your claim and advise you of your rights. Car accidents can be more complicated than they seem at first, and you need an experienced personal injury lawyer to guide you.