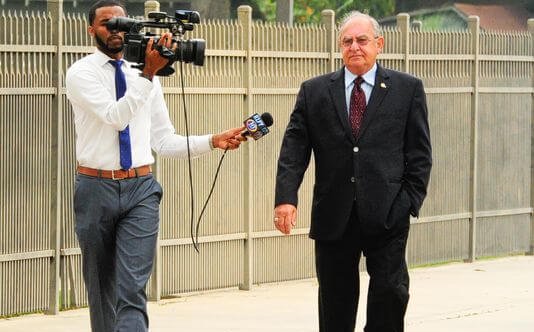 The original incident dates back to September 2010. Rickey Roche and Gerald Savoy had an altercation in the parking lot of a bar.  Savoy was a supervisor at the Iberia Parish Sheriff’s Office. After the fight, Roche was targeted by the Narcotics Unit surveillance, at the direction of Ackal and/or Savoy. Narcotics Officers Lasalle, Comeaux and Bergeron were enlisted by Savoy to deliberately target Roche.

In December 2012 Roche was pulled-over, without probable cause, for a retaliation traffic stop. Roche was kicked, punched, choked and beaten with a baton and flashlight by the deputies. During the traffic stop one of the deputies planted drugs on Roche.

Lasalle and Bergeron falsified incident reports about Roche attacking them. To further falsify evidence, they subjected each other to injuries to make it appear that they were the victims of violence from Roche.

Rickey Roche was charged with a felony. He was then intimidated into pleading guilty.  He was imprisoned for nearly seven years.

The FBI opened an investigation into civil rights abuse allegations directed at the Iberia Parish Sheriff’s Office while Roche was incarcerated. There were multiple accusations of police misconduct.

Ackal took office 10 years ago. Twenty-nine civil cases have been filed against IPSO since then. They resulted in over $2.8 million in payments to plaintiffs.

As a result of the FBI investigation, there was an indictment issued for Sheriff Louis Ackal & Lieutenant Colonel Gerald Savoy in a separate issue where the IPSO was accused of assaulting five pre-trail detainees being held at the jail. Ten former Iberia Parish Sheriff’s deputies admitted to wrongdoing and took the witness stand to testify against Ackal.

Sheriff Louis Ackal escaped responsibility for the incidents of civil rights abuses that happened under his charge. But his subordinates did not.

The deputies involved in Roche’s case plead guilty and testified against Ackal.

Wade Bergeron, one count deprivation of rights. 48 months. He stands convicted in the beating of inmate an in the jail’s chapel.

Byron Lassalle, two counts deprivation of rights, 1 count civil rights conspiracy. 54 months on each of the three counts. Sentences to run concurrently. He stands convicted in the beatings of two inmates in the jail’s chapel, along with conspiracy to abuse the two men along.

Lieutenant Colonel Gerald Savoy received the harshest sentence: 87 months in federal prison in the wide-ranging investigation into abuse and cover-ups of the Sheriff’s Office. Among the many things the prosecution accused him of was abuse of Roche. Alleging Savoy directed narcotics agents to arrest Roche on drug charges and then looked on and did nothing as the agents beat the man as he sat shackled to a bench.

After the FBI trial was completed, Roche petitioned the court for post-conviction relief and it was granted June 27, 2017. Roche was released.

The Law Offices of L. Clayton Burgess has over 20 years experience in police misconduct and civil rights abuse cases. If you are the victim of civil rights violations, you need an attorney. We offer FREE case consultations! Don’t Delay! Call Clay!