Posted at 18:52h in Sexual Harassment by Internet Team

What’s the Impact of the Harvey Weinstein Scandal on Workplace Sexual Harassment?

In October 2017, the New York Times fixed a spotlight on Harvey Weinstein by publishing a story detailing three decades of sexual harassment accusations and cover-ups. In the weeks since the story rocked the entertainment industry, dozens of women have come out with detailed stories of sexual harassment and/or misconduct. The list of allegations range from repeated unwanted sexual advances, exposing himself, forcing himself into women’s hotel rooms, forcibly performing oral sex on his victims, and multiple accusations of rape.

To make matters worse, there are at least eight known instances where his former employers paid out cover-up settlements to women who accused Weinstein of illegal activities. Actress Rose McGowan claims that she turned down a $1,000,000 offer from Weinstein in exchange for her signature on a non-disclosure agreement.

In the wake of the Weinstein scandal there have been multiple other actors, directors, and producers in the entertainment industry that have had accusations leveled at them. None of them as egregious as the Weinstein disaster. But all just as awful. All just as predatory. All by people in a position of power who came to believe that they are entitled to take what they want forcibly.

Workplace sexual harassment is found everywhere. It’s not limited to the entertainment industry. It’s not limited to women. Thousands of people are subjected to unwanted sexual advances, requests for sexual favors or physical conduct of a sexual nature in the work place. 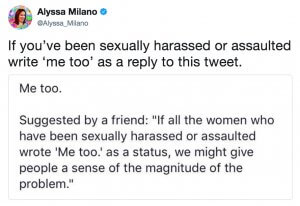 Sexual harassment is so commonplace that it’s hit social media as an awareness movement. The #MeToo campaign has been flooding Facebook and Twitter with stories from women around the country expressing how they have been victims of some type of sexual misconduct. Thousands of women, and some men, are feeling emboldened to speak out about their abuse because of the stories they read from other victims. These accounts are often uncomfortable to read, but they are becoming an important part of the dialogue that may lead to change.

Quid Pro Quo Harassment (“something for something” in Latin). When person in authority demands sexual favors as a condition of a worker’s employment and job benefits.

Hostile Work Environment Harassment. A worker is subject to a pattern of unwelcome conduct which creates a stressful work environment for the victim, as judged by whether a reasonable person in the worker’s situation would feel the same.

Due to the fact that it’s often ‘he said, she said’, sexual harassment can be difficult to prove. Employers have a responsibility to provide their employees with a workplace free from harassment and discrimination, and free from retaliation against employees who report unlawful conduct of coworkers or supervisors to authorities. Title VII and state laws exist to protect workers from sexual harassment. However, there are steps you can take to help prove your claim before filing a civil lawsuit, including:

Victims of sexual harassment may be entitled to financial compensatory damages including back pay, pain and suffering, and punitive damages.

If you feel you are the victim of workplace sexual harassment in the workplace or retaliated against after complaining of harassment, you need an attorney. The Law Offices of L. Clayton Burgess have experience in sexual harassment cases. Contact us today to schedule a consultation.